Setting Up Your Home Studio - Part 1

What is a Home Studio?

Long gone are the days when you needed to get spotted by a record label to be able to record a single song, and paying for the production of an entire album in a commercial recording studio was only a dream for most mortals. In the last three decades, miniaturization and globalization (the euphemism used to describe the outsourcing of production and supply chains to "third world" countries where labor costs are ridiculously low) have made gear accessible to anyone and made hobby musicians partially self-sufficient.

Why partially? Because, except for some rare exceptions, recording studios still remain the best solution when it comes to recording and producing music professionally.

You can obviously find studios that charge $400, $300, $200 and even $100 per day! But you need to be aware of what you are paying for. Usually such studios are home studios (aka project studios) rather than professional recording studios. If I had to draw a line between professional studios and home studios I would take room acoustics as the main argument: if an acoustics expert has been involved in the design of the place then you can start talking about a professional studio.

Expensive gear and treated room acoustics are not the only reasons that studios are the best place to make music. What really makes the difference are the people turning the knobs. When you go into a studio you are not just looking for a giant console or $3,000 microphones or the perfect acoustics and the coolest control room in the world. What you want are engineers and assistants who know the place, know the gear and know how to get the best out of them, while at the same time sparing you any worry about any technical issues. That is priceless. Although, on second thought, it does have a price, starting somewhere around $400 a day at small professional studios and going up to several thousand per day at legendary outfits. It all depends on how famous and big the place is, what gear they have, and who is going to be turning the knobs for you.

And as you've probably realized, we are talking about fees per day here, which points to the main con of any studio: time is limited. 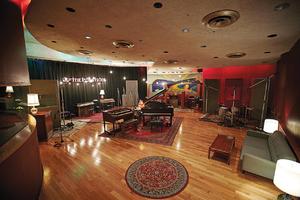 The advantage of having a home studio is that you can spend lots of time in there. The Rolling Stones and Pink Floyd, for instance, can afford to book mythical recording studios for three straight months to jam, write songs, rehearse, and produce their albums. But the crisis of the record industry has taken its toll and nowadays there are only a few musicians who can afford such eccentricities. So, the production of an entire album is often reduced to just a couple of weeks or even less, depending on the budget.

With that in mind it's obvious that you can't expect to be able record and produce 10 to 12 tracks in the studio while at the same time learning to play a new instrument, trying out new ideas and tricks and recording hundreds of takes. When you go into the studio you need to have everything as streamlined as possible so that you don't waste any of your precious time there. In fact, many of the biggest names in the industry, who don't really have any financial constraints in this respect, write and pre-produce most of their stuff at home. And it's only when the songs are at the last stages that they move into the studio to cut them onto disk (actually the trend right now in most studios where entire albums used to be produced is to record only vocals and strings, while keeping the rest of the recordings that were made in the artist's studio). 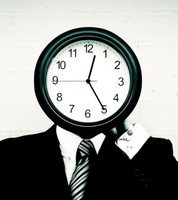 In comparison, time is not an issue in your home studio. You won't have a producer or engineer tapping his fingers every time you decide to record the umpteenth take of the same part. And nothing stops you from spending six months on one song (which can also be counterproductive in the sense that you might find yourself never finishing it...). To sum it up, the home studio provides you the only thing that a professional studio can't: unlimited time. As French poet Alphonse Lamartine wrote:

Pause in your trek O Time! Pause in your flight,
Favorable hours, and stay!
Let us enjoy the transient delight
That fills our fairest day!

Apart from that, your home studio is a place conceived for and by you, with all the comfort you can afford in your own place. However, all this comfort could well be both an advantage and a disadvantage. The perfect take might be ruined by your daughter coming into your home studio yelling that she's hungry! Or maybe by your wife or husband (or your mom or dad) shouting "dinner is ready"! That's why some musicians setup project studios outside of the home.

What can you find in a home studio? 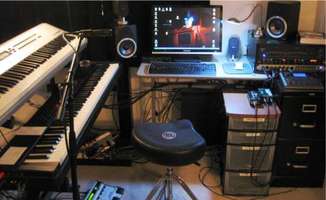 In theory, home and project studios have the same type of gear as in a professional recording studio. But it all depends on the studio itself because it's obvious that a DJ making electronic music won't need the same gear as a guitarist who makes rock/pop. And there will also be differences depending on whether the studio in question is owned by a professional musician who has been investing time and money into it for some time or a budding musician just starting out.

Here's a list of the typical gear you're likely to find in such studios, even if only the first four items are common to all types of home studios:

And, depending on the case, you might also consider a bed, a French door, a washing machine, your cat's box (cat and hairballs included), a bathroom with a shower, a microwave, an halogen lamp, a plastic dog that wags the tail automatically, some drinking glasses that rattle every time you open or close the window or the door.

Because, as you will see later on, the biggest advantage of a home studio is, at the same time, its biggest disadvantage ─ namely the fact that it's at "home."