It Takes Tubes to Tango

When you pick up the hardshell, briefcase-style case that the MA-300 ($1,295) comes in, you get an inkling that this is a well-made product. Inside you find the mic, its power supply, AC adapter, cable, and shock mount, all safely nestled in foam cutouts. In fact, the mic is in its own hardshell case, within the larger case. 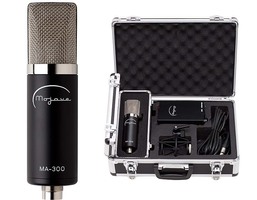 The MA-300 has a nice hefty feel to it, and features switches for a high-pass filter and a built-in -15 dB pad. The included adjustable shockmount is of the heavy-duty variety, which is good, because a lot of shockmounts have a tendency to fall apart after a while.

Inside the mic is a hand-selected 3-micron double diaphragm capsule, based on the one in the company’s popular MA-200 fixed-pattern tube condenser, and the tube is a military grade JAN 5840.

The power supply, which connects to the mic via the included 7-pin XLR cable, features an on/off switch, and an XLR output labeled “Audio,” for connecting to your mic preamp or console. It also has a dial for the continuously variable polar pattern featuring omni on the extreme left, cardioid at 12 o’clock, and figure-8 on the extreme right. You can dial in any gradation in between by just turning the knob. Very handy. Those outside the U.S. will be glad to hear that the power supply is switchable between 115V and 230V via an external switch, and 50 and 60 Hz via an internal switch. The power supply connects to the wall via a detachable IEC-type grounded cable. 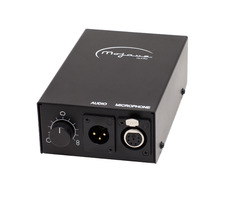 Mojave Audio recommends the MA-300 for a lot of different applications, including vocals, voiceover and broadcast, acoustic instruments, piano, drum overheads and drum rooms, plus orchestral and choral recording. While I had no way to test it on all of those sources, I did try it out on a number of acoustic instruments, and on vocals and spoken voice, and I was very pleased with the results I got. As one would hope with a tube mic of this price, it made everything sound really warm and full, without any harshness in the high end.

The following vocal examples are from a session I recorded in my studio with a Zydeco band. I was able to get a much better sound on the vocals than I had on previous recordings with the same singers, where I used a solid-state mic. There’s a little compression on the vocals, but no EQ. All examples were recorded into Pro Tools through an FMR Audio RNP8380 preamp.

The first is the male vocalist singing a line.

Next is the female vocalist singing the same line.

And here they are singing the line together.

Here is a Martin D-28 recorded with the pattern set between omni and cardioid to lessen the boominess of the proximity-effect.

Needless to say, I'm very impressed with the quality of the MA-300, and am particularly wowed with how it sounds on vocals. At $1,295 it's certainly not an impulse buy, but if you’re looking for a premium mic that’s on par with more expensive competitors, and you want the warm sound of a tube mic and the versatility of continuously variable polar patterns, you can't go wrong with the Mojave MA-300.