It's a common occurrence these days be walking down the street or riding on the subway or the bus, and encounter someone talking loudly on a phone or listening to loud music.

Some people find this to be rude and disrespectful, yet they'd probably disregard much more harmful noises in the same situation, like the cacophony of train cars leaving or arriving at the subway station, the screeching brakes of a bus or the continuous honking of cars during a traffic jam. What's most disturbing about this is that you rarely see people protecting their ears against such noises, be it with their hands, headphones or earplugs. Ironically, in-ear headphones or earbuds can actually shield your ears against such noises, attenuating their volume to an acceptable level. Over-ear and other type of headphones may also do the job. The problem comes when people turn up their music loud enough so they can hear it through their earbuds/headphones, over the sound of those environmental noises.

I'll use an example to make my point: Assume you are on the subway and want to listen to a song that has 20 dB of dynamic range (yes, they still exist) using a pair of headphones without noise-cancelling (something I'll come back to later on). Did you know that the average volume inside a subway train (especially old ones) is somewhere between 80 dB and 85 dB? So, if you want to listen to all the nuances with your headphones, they need to be louder than the background noise, which means you need to increase the volume to avoid any masking (approximately 6 dB to 10 dB). Now, do the math: Average background noise + added volume + peak level of your music. How much is that? Disturbing isn't it?

This gives me the perfect opportunity to talk to you about the huge changes in the way we listen to music, especially when it comes to listening on the go, one of the main causes for the volume race.

Let's take some time to recall how this change of paradigm took place. As you already know, radio broadcasters were the first to use compression (see the previous article). Well, the volume race also started in radio stations, go figure.

In his fascinating book Perfecting Sound Forever, Greg Milner explains how, according to him, everything started in 1974, when Larry Berger was Program Director at WPLJ (founded in 1948; not to be confused with the Four Deuces' W-P-L-J, which stands for "White Port and Lemon Juice," later covered by Frank Zappa). Surprised by the low volume of his station compared to other ones, he decided to use a processor called the Dorrough 310DAP (DAP stands for Discriminate Audio Processor), which featured multiband peak-limiter functions, to crush the dynamics of the signal. Created by engineer Mike Dorrough, the 310DAP was the first to provide three separate compression bands.

With the help of Dorrough and engineer Bob Deutsch, they compressed Elton John's Benny And The Jets so much during the first test, that the needles of the VU-meters almost didn't move at all! When the author asked him whether he was aware of the problems created, particularly in terms of ear fatigue, Berger replied: "No, that’s bullshit!" I would really love to have the chance to respond to him in the same polite manner.

Dorrough soon regretted having taken part in any of it, but the race for volume had begun. And everyone behind a radio console started to think of ways to sound louder than the neighboring station, ranging from the use of weird processors to overmodulation (which was, in theory prohibited by law). 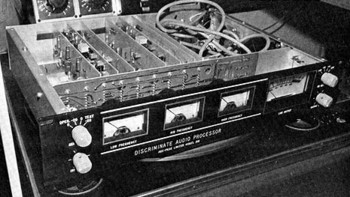 All this took place in the USA, obviously. But the exact same happened elsewhere. In France, for instance, shortly after the arrival of pirate radio (in 1981-82), which was a very creative period for radio indeed, it all started to go downhill. It didn't take long for radio stations to start competing for which was the loudest. The idea was to show advertisers who was the boss (in terms of volume) to collect the biggest share of advertising dollars.

And there's another important factor to consider: While hi-fi audio systems were starting to make their way into living rooms in the '70s and '80s, they remained relatively expensive. This means most people listened to radio on small (solid-state) receivers that had poor-quality speakers and were mostly mono. Sound didn't matter much, what was important was to be able to tune in to your favorite program. Things have obviously evolved since then, along with the quality of receivers. But the aforementioned paradox is still valid: You have now access to evermore powerful tools only to listen/produce ever poorer-sounding music.

Currently, all radio stations use a broadcasting procedure that provides a particular "sound," a signature, although most of them end up transmitting an overcompressed and overdistorted sonic mush. There are still some exceptions, though, especially among public radio stations, many of which try to avoid overprocessing the broadcast signal.

However, the times they are a-changin' with Internet broadcasting via YouTube, iTunes and the like (something I'll come back to later on).

We have only started to understand the origins of the loudness war...