The Vypyr Series was born out of  Peavey's attempt to compete with the Line6 Spider Series and take a bite out of the modeling amplifier market.  Today we will review the Vypyr 75. Could the viper beat the spider?

Back in the 90's, Peavey was one of the leading manufacturers in the solid-state guitar amp market thanks to its Transtube technology, which simulated tube sound more or less successfully.  With this background, and considering that modeling amps are currently very trendy, it's natural for the US manufacturer to try to jump into this business. In fact, Line6 was the first to launch its Spider Amp Series and their numerous preamp simulations and effects, then Vox followed suite with its Valvetronic models.

Out of the box Once in front of this big 44lb box you feel two things: fear of the control panel with its multiple red and green LEDs (great for next Christmas!), and repulsion for its dubious look, which might have been futuristic in the 70's. It's not the best way to start, but we're not going to let such small details derail us.  We are going to put our prejudices aside and pick apart this Vypyr...

Let's start with the connectivity and the inevitable guitar input connector, which is even a joke in the user's manual: "If you are having trouble figuring out what this is then please put the amp back in the box and get some drumsticks. * (*No drummers were harmed in the making of this manual)." I have to admit that it made us laugh alot here at AudioFanzine–drummer jokes always hit the nail on the head.

You'll also find a 1/8" aux input to feed a stereo source for playback (iPod, drum machine, etc.), a phones output (which mutes the speaker when in use), and an USB connector which doesn't require any driver and allows direct recording into your computer with mic simulation. Nice! On the rear panel you'll find a connector for the optional footboard and a connector for an additional speaker cabinet (the internal speaker is a 12" Blue Marvel). Peavey forgot to add an FX loop to insert your favorite effects, even though the internal FX of the amp are plentiful. It's a pity.

Now, let's take a look at the front panel controls...

Let there be light 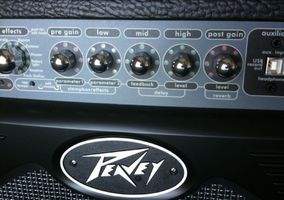 You'll be surprised if you turn on the amp without connecting a guitar into it: the amp starts to flash all over the place. It looks kitschy and useless (unless you put the Vypyr next to the Christmas tree), but there is something about it.

So, what are all the LEDs for? Every endless knob is surrounded by a LED indicating the effect, the amp and the current setting. It's easy to read but not very accurate: the EQ controls have only seven LEDs, for example. Nevertheless, they are very useful for the Stompbox knob, since each LED corresponds to one of the eleven pre amp effects: XR Wild (warm overdrive), X boost (booster), fuzz, BC chorus, squeeze (compressor), ring modulator, auto wah, MOG (octaver FX that generates two notes simultaneously, one octave below/above), analog phase, tube Scrm, and bypass. You can edit the parameters of every effect by pushing the Stompbox encoder and using the EQ and gain controls. 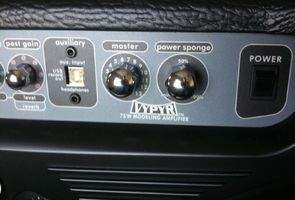 There's also a 3-band EQ (low, mid, high), and pre gain and post gain settings. After pushing the Stompbox or FX encoder, you will be able to set the corresponding parameters like delay time, reverb level, flanger speed, gain of a distortion pedal, etc. The master volume control–which goes up to 13(!)–would make Spinal Tap's guitarist look like a wimp. Technical advances are wonderful! Last, but not least, the Power Sponge knob allows you to simulate a cranked up amp without increasing the output power.

With so many settings it would certainly be a pity not to have a way to store them. That's why Peavey added twelve memories sorted in three banks with four presets each. Furthermore, they are easy to use: just press and hold the preset number to save your settings. To recall the preset press the button briefly. A tap tempo knob allows you to synchronize time effects with the song's tempo. 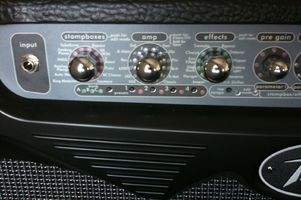 Below you can find some takes we did with a BeyerDynamic M88 placed in front of the 12" Blue Marvel speaker.

With its 24 modelings (twelve amps with two channels each) the amp is quite versatile. And the sounds, even though not always faithful to the original modeled amps, are very good considering the price of the Vypyr. Fender-like clean sounds are full and their lead channel can even produce a nice crunch. Marshall-like amps also sound pretty good. The "Brit" preamp sound is less convincing, but the Peavey and high-gain models make up for it. There's nothing to say about the effects: there's something for every taste (even the worst). All effects sound good and none is unnecessary. The only drawback would be the similarity of the high-gain models. The following sound samples were made with a Gibson Les Paul Studio with all twelve models (green channel first, then red channel):

We used the green channel of the Tweed simulation to test the effects:

All pre amp effects sound good. The distortion pedals sound convincing (especially the XR Wild), and the modulation effects do a great job (especially the Analog Phase). Nevertheless, some of them are not absolutely necessary, which is usual for such a plethora of effects. 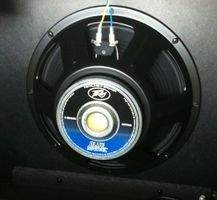 The high-quality flanger and chorus effects are very nice surprises, especially for an amp in this price range. The octaver effect which tends to generate artifacts and a short latency time, can be felt with the pitch shifter.

Making use of its broad know-how, Peavey created an amp which provides big sound possibilities at an affordable price. 24 quality amp modelings, a plethora of effects (which could be a problem for young guitar players who tend to overflow their sound with effects), 75 watts (more than enough to play with a band), a hideous look and a master knob that goes up to 13. All for $300! What else could you ask for? Line6, beware- here comes a new challenger!