Tools to give cohesion to your mix

Tool of the trade

I'll start with the tape machine emulators. I often rely on the U-He Satin, which offers a very wide array of colors and possibilities. In my opinion, the subtlety of its processing elegantly adds a nice retro/analog lacquer to any production. However, when I'm looking for something more evident, I often turn to the more accessible ReelBus by ToneBoosters. 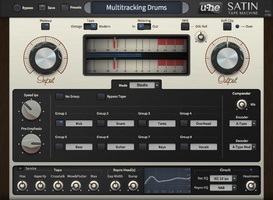 When it comes to analog console emulators, I really like the Slate Digital VCC 2.0. Before I discovered the VCC, I used to use the Sonimus' Satson. But my all-time favorite when I want an unambiguous vintage color is the Klanghelm SDRR (https://en.audiofanzine.com/plugin-distortion-overdrive/klanghelm/sdrr/). And, in case you are interested, they have a free version of the plug-in available.

When it comes to EQ, I seldom use "virtual analog" because I prefer more subtle and precise plug-ins. That said, when I get the itch for "analog" gear, I really enjoy using the SlickEQ Gentleman's Edition by Variety Of Sound. The software maker also offers in the SlickEQ a free version of the plug-in, which is a bit more limited. From time to time, I use the Neve and SSL modeling plug-ins that come with Slate Digital's Virtual Mix Rack, whose compressors I also employ.

Speaking of compression, I must admit that I have a weakness for this type of tools, especially considering when I'm going after the glue effect. To that end, I use several plug-ins to have a wide array of options: I recently tested the Klanghelm MJUC and it has ever since taken a very important spot within my arsenal. And, as usual with this German company, there is a free version available – what else could you ask for? The SKnote SDC dual compressor is also a regular on my buses. Finally, U-He's Presswerk, the chameleon among analog compressors, can be found on many of the productions I put my hands on, too.

And that's it for today. But before I say goodbye, I invite you to try out the free/demo versions of these plug-ins so you can find the right one for you. See you next week for some new adventures in mixing!