Subtractive Synthesis: Straight to the point

For example, in the previous article, we talked abut ring modulation, which implies the modulation of a waveform by another one. But did you know that modulating a waveform with another one is the principle behind one of the most widespread methods of sound synthesis, called Frequency Modulation (FM), popularized by Yamaha and their emblematic DX7 synth? But let's not get ahead of ourselves. Because before we study FM synthesis in an upcoming article, let's take a look at the most widespread synthesis type. Let me introduce you to...subtractive synthesis! 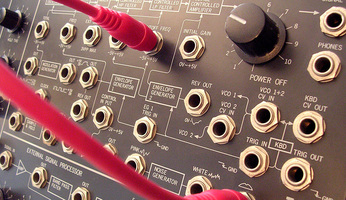 As we already saw in article 4, rich audio signals are composed essentially of the following waveforms: Sawtooth, triangle and square. It wouldn't be too interesting to apply a filter to a simple sine wave, since the latter has no harmonics, meaning it wouldn't be affected by the filter as long as the cutoff frequency of the filter isn't exactly the same as the one of the waveform itself. Hence, once both frequencies are the same, the waveform would be completely canceled — and with it the sound it represents. In other words, subtractive synthesis on a single sine wave would result in an On/Off effect. In fact, you don't necessarily get such a clean cutoff, but the effect is very close to it. 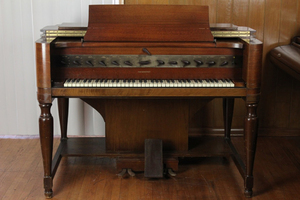 Subtractive synthesis — which, by the way, is not the oldest type of sound synthesis, as we will see in the upcoming articles — first appeared in the 1930s, with the Novachord manufactured by Hanert, Williams and Hammond (yes, the same guy responsible for the famous organs).

But the two most famous representatives in this category are the Minimoog by...Moog and the MS-20 by Korg.

The former came out in 1970 and became an instant success, thanks in great part to one Keith Emerson. He was the first musician to use it live, and was responsible for developing many techniques for playing it. 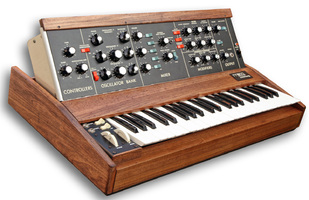 This monodic synth (see articles 9 and 10), features 41 keys and three oscillators, one noise generator and an input for an external signal. The third oscillator and the noise generator can be routed to the CV inputs of the other oscillators and the filters. FYI, CV stands for Control Voltage, which is a parameter control protocol like the more "modern" MIDI (see article 11). However, unlike the latter, the CV protocol isn't based on digital values, which weren't as commonly accessible when it first appeared, but rather on electrical voltage variations. With this routing possibilities, the third VCO can be used as an LFO to modulate parameters.

Finally, it's also worth noting that the filter itself can be made to oscillate, adding yet another sound source to the features of the synth. Furthermore, its 4-pole filter (see article 7) became Moog's trademark sound and it can still be found on the brand's modern products (like the Minimoog Voyager, a 2002 reinterpretation of the original Minimoog, and even the Little Phatty, launched in 2006 for example). 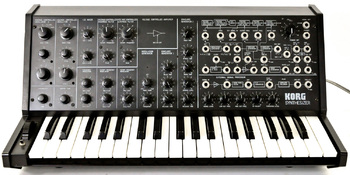 The other emblem of subtractive synthesis, the Korg MS-20, came out in 1978. Unlike the Minimoog, it has a semi-modular architecture. This means the user can use cables on the front panel to reroute audio signals or modulations towards other destinations.

Also monodic, the MS-20 features a 36-key keyboard, two VCOs, ones noise generator, one LFO, two VCFs (a 1-pole high-pass and a 2-pole low-pass), and two envelope generators. In addition, it has an external signal processor, which allows it to be controlled by the sound of another device or even a human voice.

All this, combined with the modularity we mentioned above, give it unusually extensive creative capabilities.

In the next article, we'll examine mother of all other sound synthesis types: additive synthesis.