These iOS synths have the power to rival desktop virtual instruments 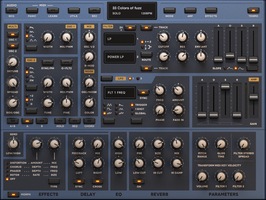 If you’ve ever played a JP-8000—Roland’s first virtual analog synth, introduced in 1996—Sunrizer’s GUI may look familiar. Like the JP-8000, Sunrizer has two analog-modeling oscillators that can generate multiple sawtooths simultaneously, called supersaw waves, to create thicker sounds than you’d expect from only two oscillators. It also has a noise generator, two filters offering 15 filter types, two versatile LFOs and two ADSR generators. An excellent collection of presets is included, and you can download more from the Web without leaving Sunrizer.

The dockable multi-effects section offers a variety of distortion, delay and modulation effects, as well as EQ and reverb. The onboard arpeggiator lets you design and recall your own patterns, and the real-time audio recorder lets you save a library of phrases and copy them to other apps. Perhaps Sunrizer’s most outstanding performance feature, though, is that it allows you to store two complete front-panel setups in a single preset and dynamically crossfade between them using a modulation wheel.

iTar 2: Sunrizer supplies a collection of presets in a variety of styles.

Cave Alien: Sunrizer makes good use of its effects section. 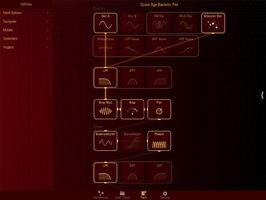 TC-11 is the kind of radically different synthesizer that wouldn’t be possible without a touch screen. Rather than relying on a keyboard and knobs for input, in performance view, it simultaneously plays sounds and generates parameter control data in response to gestures like where you touch the display, how fast you slide your fingertips around the display and the distance between one touch and another. Some patches also use the iPad’s internal gyroscope, accelerometer and compass as device motion controllers that change parameters as you lift and tilt your iPad. Onscreen buttons and alternate views allow you to load, save, create, tag and modify patches.

For creating and editing patches, TC-11 supplies a collection of synth objects such as wavetable, noise, granular and FM oscillators, waveshapers, filters, resonators, amplitude modulators and effects, as well as parameter control modules that comprise step sequencers, tables, LFOs and AHDSR generators. You can freely connect objects and modules as you would on any modular synth and specify what kinds of actions will affect their parameters. Because using TC-11 isn’t like playing or programming any other synth you’ve used before, it lets you create music that sounds like nothing you’ve ever heard.

Bubble Swamp: You control TC-11 by tapping and sliding your fingers on the iPad’s display. 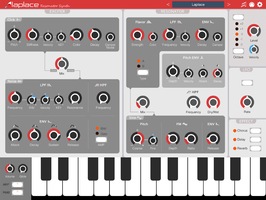 If you want to get your feet wet with physical-modeling synthesis, Laplace is a good place to start. It simulates sounds that result from plucking and bowing stringed instruments, blowing through wind instruments and striking metal objects, as well as sounds that combine these actions. Laplace also features a cool 16-step arpeggiator with user-programmable patterns, MIDI learn functionality, chorus, reverb and a fairly sophisticated delay processor.

A Laplace timbre begins with the Exciter section, which provides various Click and Noise parameters. Shaping the click simulates striking something, and adjusting the noise simulates blowing or rubbing on something. Parameters in the Resonator section control filter and pitch envelope characteristics, and a sine-wave oscillator throws frequency modulation into the mix. Fortunately, though, you don’t need to understand how physical modeling works to create some dynamite timbres simply by fiddling with the knobs. Laplace doesn’t go as deep as some synths, but it makes some very nice sounds you’d be hard-pressed to make without it.

Bottole 2: Laplace library of presets isn’t terribly versatile, but it shows off the basics of what it can do.

Original: Laplace’s presets are good places to start programming your own sounds. 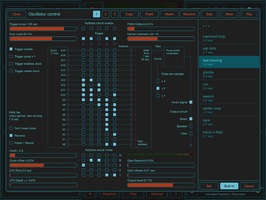 You’ll be forgiven if you don’t think Soundscaper looks like a traditional synthesizer, because there’s nothing traditional about it. It excels at generating nontraditional sounds: glitchy pulsations, weird textures and bizarre audio backdrops, in particular. Soundscaper’s three sample-playback oscillators import sound files up to 95 seconds long in a broad assortment of data formats. The included sample content ranges from dripping water and animal noises (angry rattlesnakes, anyone?) to clips from a vintage sci-fi movie and a Texas Instruments Speak & Spell from the late ’70s.

Each oscillator has its own state-variable filter, delay processor and random parameter generator. As samples loop, they move around in 2-dimensional space on paths you specify. You can assign three LFOs to modulate filter frequency, resonance, playback speed and spatial location. Soundscaper is most effective, though, at simulating the type of lo-fi audio mangling you can accomplish by circuit-bending electronic toys.

Restrained Buzzer in Recombination: The sample content that comes with Soundscaper is definitely out of the ordinary. 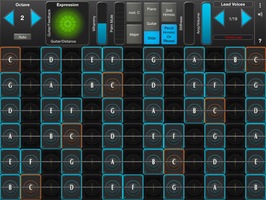 I think of GeoShred as Dream Theater keyboardist Jordan Rudess’s iPad-centric answer to the Continuum, LinnStrument, Seaboard and other multidimensional polyphonic controllers. With a sound engine designed by moForte, GeoShred is a physically modeled guitar that has a level of sophistication I just haven’t seen in other music performance apps. Like TC-11, it relies heavily on multitouch, displaying a grid of clearly labeled buttons you touch to play notes, arranged like strings and frets on a guitar. Pitches ascend chromatically from left to right on six horizontal strings, and by default, vertically in fourths. As you play, you can wiggle your finger for vibrato and slide left or right to bend pitch and execute glisses. Astonishingly, you can perform those actions using more that one finger at the same time, even if they’re moving in different directions and at different rates.

Because GeoShred is physically modeled, you can manipulate characteristics such as body and string type, pinch harmonics, palm muting, pick position and much, much more. You can even control feedback as you play. It also supplies a well-stocked effects pedalboard, an arpeggiator and a collection of presets that includes electric and acoustic guitars, basses, power chords, exotic textures and even synth timbres. GeoShred is a surprisingly versatile music app and a true musical instrument in its own right.

Lead Voices: GeoShred gives you real-time control of feedback and other performance parameters.

Geary Yelton is Electronic Musician’s former senior editor. He's been writing for EM continually since 1985 and also writes for the U.S. magazine Keyboard. He authored two editions of The Rock Synthesizer Manual and served as staff synthesist for three major Atlanta recording studios. Currently, he's a freelance writer and consultant for the Bob Moog Foundation and lives in Asheville, North Carolina, and Nokomis, Florida.
Viewers of this article also read...