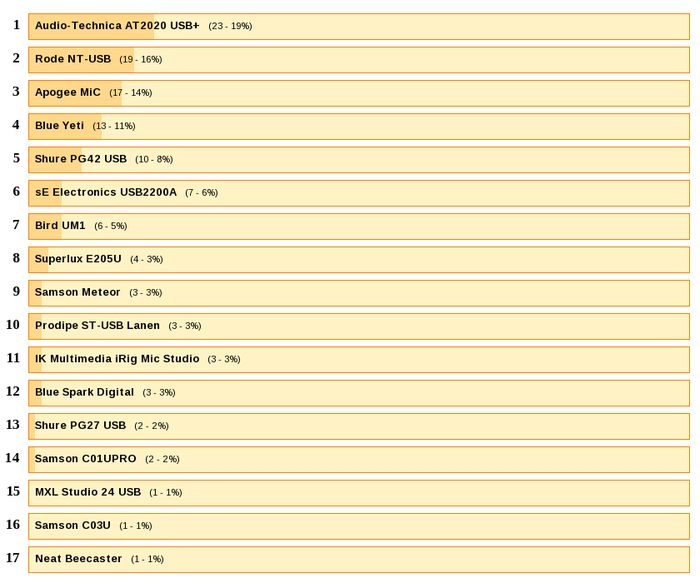 118 Audiofanziners took part in the poll and the top five picks were these:

The top spot in the poll went to none other than the AT2020 USB+ manufactured by Japan-based Audio-Technica, which features the sames specs as the AT2020, one the the brand's best-sellers. The mic has a headphone output with volume control, allowing you to monitor the signal without any delays at all. It also has a knob that allows you to mix the mic signal and the one from your recording software. It converts audio at 16 bit, 44.1/48 kHz and is Windows 7, Vista, XP, 2000, and Mac OS X compatible. The cherry on the cake is the desktop stand it comes with.

In second place was the Rode NT-USB which also features a headphone output and a mix knob to control the direct signal and the return from your computer. It works at 16 bit, has a cardioid polar pattern and can handle up to 110dB SPL.

The Apogee MiC, compatible with Mac, iPhone and iPad, landed the third spot. It works at 24 bits/96 kHz, has 40dB of gain and a cardioid polar pattern. The MiC was especially designed for GarageBand, even if it can certainly be used with other software. It comes with a Lightning cable, a desktop stand, an adapter for a standard mic stand, and a USB cable.

The Blue Yeti didn't make it to the podium, but some of its handy features, like the mute button, volume knob, and included desktop stand allowed it to rank among the top five. It too has a headphone output, mini USB port and a proprietary three-capsule system to provide up to four different polar patterns. The Yeti comes in three versions: Standard, Studio and Pro (with XLR connector and 24 bit/192 kHz converter).

The PG42 USB by Shure secured the fifth position. A mic conceived for solo singers, it features a highly sensitive large diaphragm, cardioid polar pattern, mini-jack output providing a latency-free headphone monitoring signal, and a knob to mix the direct signal and the return from your computer. You can control the gain directly from the mic itself, which weighs less than a pound.

The rest of the mics included in the poll were: