A review of the Keeley Mod Workstation pedal 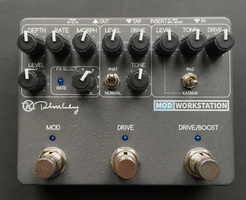 Measuring in at roughly  4.5” wide by 3.5” deep, the Mod Workstation is surprisingly svelte consider all that it has going on inside. It does not include a power supply (boo), but it takes a standard 9V supply, so you can power it from your pedalboard’s power supply or a Hot Spot. A soft, black carry bag is included with the pedal.

In addition to standard 1/4” input and output jacks, the pedal also features a TRS Insert jack that, with a TRS insert cable (not included), creates an effects loop between the modulation and drive sections of the pedal. The final jack is for a Tap Tempo switch. The switch isn’t included, but you can find third-party tap tempo switches for between $20 and $50, so adding tap tempo capability doesn’t require a huge investment.

The controls for the various sections are clearly laid out, so there’s no confusion. Each effect section has it’s own on/off switch.

The Mod section has an eight-way rotary selector switch for dialing in a modulation type, as well as Depth, Rate controls.  and Morph controls. More on Morph later in this review.

The 8-way switch is small — the same size as all the other knobs. I wish it was a little bigger. If you’re adjusting it on a dark stage, you’ll have to go by feel. Fortunately, it clicks into place for each position, making it possible to count the clicks once you’ve memorized which effects are where. To its left is the Rate Indicator, an LED that flashes in time with the speed of the effect.

The modulation effects included are Tremolo, Harmonic Tremolo, Filter, Phaser, ADT, Chorus/Vibrato, Flanger and Rotary. The Morph knob controls different parameters for different effects. For example, the Wave Shape of the Tremolo, LFO Shape on the Filter, Feedback on the Phaser and the Flanger, and so forth. Although Keeley doesn’t include a manual, they do give you a handy-dandy two-sided printed card that defines every knob and switch on one side, and gives you a table for the modulation effects on the other, which shows what the knobs — most importantly the Morph knob — control (I’ll cover the sounds themselves later in the review).

The next section over is called Drive, and gives you the circuitry and most of the controls of Keeley’s Oxblood Overdrive pedal. These include Level, Drive and Tone knobs, and Phat/Normal switch, . It’s only missing the original Oxblood’s Clipping switch. With Phat engaged, you get a bass boost that helps make the distortion even warmer. 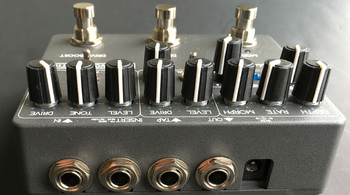 The final effects section on the Mod Workstation is Drive/Boost. It lets you switch between Kantana, which is a clean boost (Keeley has put out a number of pedals with Katana circuitry over the years), and 1962, which gives you the sound of Keeley’s 1962 British Overdrive. Again, you get Level, Tone and Drive knobs, but the latter two only work in 1962 mode, not for the Katana boost.

Overall, the sound quality of the Mod Workstation is excellent. I’ll start by going over the modulation effects.

Tremolo: The tremolo sounds excellent, especially when set to the triangle wave setting with the morph knob, like in this example:

In this example, I set the morph for square wave and added distortion from both the Drive and Drive/Boost circuits of the pedal:

Harmonic Tremolo: Similar to the Harmonic Vibrato on some old ‘60s Fender amps like the Tremolux. It’s kind of like a cross between a tremolo and a phase shifter. It’s a very cool effect, more spacey than standard tremolo. The Morph knob works like a tone control for Harmonic Tremolo, and in this first example, it’s set full up:

In this one it’s at about half, and there’s both Oxblood and 1962 drive on, as well:

Filter: I didn’t have a much luck dialing in cool sounds with this effect. Instead of a Depth control, the Depth knob adjusts the Q (bandwidth) of the signal. The Morph changes it from a random filter effect to an oscillating wah. The wah doesn’t respond to your notes the way a typical auto-wah would, it just opens and closes the filter at the speed you set. If it happens to catch a note, great, if not, the note doesn’t wah. I would have much preferred a standard autowah. Here’s my attempt to get a wah sound:

Phaser: I really like Phaser effect in this pedal. It’s sweet sounding and fairly versatile. You have the choice of a standard phase shifter sound, or adding a fed-back signal into it, which makes it more complex sounding. In this first example, the feedback is on full:

In this one, the phase effect is slower and the Depth is turned up high and the feedback lower:

ADT:  Short for Automatic Double Tracking, it mimics the effect famously invented by Ken Townsend for the Beatles when they were recording at EMI Studios in the mid ‘60s. The Keeley version works on a combination of Delay and Pitch Bend. I was able to get some very cool, almost 12-string-like tones using it. The only problem was that I had to set the Pitch and Delay Time very low in order to keep the effect from pushing my guitar out of tune. As a result, there was a much smaller usable range of settings. Nevertheless, it sounds very cool. Here’s an example on a guitar capoed up two frets:

Chorus/Vibrato: You get two effects in one on this one that you can use the separately or together, depending on the setting of the Morph control. In this example, the effect is set to Chorus, and I added heavy distortion from the Oxblood and 1962 drive effects:

Here’s a cleaner example showing the Vibrato effect with the Depth up high and the Katana boost on:

Flanger: On this effect, the Morph knob lets you dial in flanging with no feedback, flanging with negative feedback and flanging with positive feedback, and settings in between. I like the sound of this effect a lot. It’s more controlled-sounding than some flangers. It’s “whooshiness” remains fairly subtle, even at high settings. In the first of two examples, the feedback is off, and the Oxblood is set to provide an overdrive sound:

In the second example, I have the negative feedback on for this little funk rhythm part:

Rotary: The last modulation choice is Rotary, and the Morph knob changes the tone between the “horn” and “drum” of the emulated Leslie. It’s a pretty convincing rotating speaker emulation, and easy to set. Here's what it sounds like:

Take it for a drive

You’ve heard some of the distortion and overdrive effects from this pedal in a number of the previous examples, but now I’ll focus on the drive effects in particular. With the Drive and Drive/Boost sections, you have the tools to create a wide range of distorted sounds, from crunch overdrive to full out fuzz.

The Drive section, featuring the Oxblood overdrive circuitry, is really warm sounding distortion especially with the Phat switch (a bass boost) in. The Katana boost (part of the Boost/Drive section) works nicely in conjunction with the Oxblood. In this example, the boost is first off, and then when the phrase repeats, it’s on. Then it’s off the first time around of the second phrase, and back on. You can hear how the boost kicks the distortion up a notch:

Here’s an example of a crunchy overdrive with the Oxblood with the Normal switch on and the Drive/Boost on and set to Boost:

The 1962 drive in the Drive/Boost section gives you Marshall-style distortion, and is useful either on its own or in conjunction with the Oxblood. Here it is by itself, with the gain at about 3/4:

In this final example, the 1962 is working in conjunction with the Oxblood (on Phat), to create a high gain sound. Listen at the end as the sustaining note feeds back:

The Mod Workstation ($299) is a great-sounding and extremely versatile analog multi-effects unit. Despite its small footprint, it offers a wide variety of modulation effects, plus boost, overdrive and distortion — all in one unit. I really don’t have much in the way of complaints about the Mod Workstation, except for the lack of an included power supply and the rather hard-to-use oscillating wah. I wish Keeley had included a more standard envelope-follower-type auto-wah, which responds to your playing.

While it’s true that this pedal is not cheap, when you consider how many single pedals you’d need to equal what it has in its arsenal, you realize that it’s actually a great value, not to mention it's one sweet sounding pedal.