The order of the buses I told you about last week is by no means random. In fact, while all of them have an impact on the sense of space created, the first five of them are aimed mainly at providing some fullness to the tracks they are used on. So it's only logical to start working on that before tackling the "glue" effect or the placement in the sonic puzzle.

Let's start with the vocals. Why? Well, basically because in "modern" music the vocals are often the main element of the mix, which ought to capture the attention of the listener. Hence, it makes sense to put special attention on it. This is how I go about it: 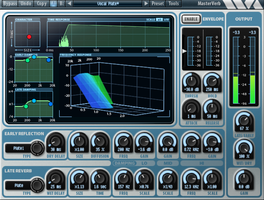 It's all a matter of taste...and color

Once I've done this for the vocals, I apply the exact same method to the four other buses.

For the snare I usually use a Plate algorithm, out of personal preference, but you are obviously free to pick whatever rocks your world.

Regarding solo instruments, if any, I like to work with the same preset as for the vocals, but with a different pre-delay and fine-tuning. This makes it all more sonically coherent without blurring the distinction between vocals/solo instrument. I sometimes also prefer to use a delay effect instead of a reverb here, when the production allows it.

Finally, for the last two buses I usually use two completely different reverbs. One with a very typical spring or plate sound and the other one with a more neutral hall or chamber algorithm, both with very similar pre-delay and decay settings. These buses are obviously optional, but used discreetly and intermittently on a couple of elements of the mix, they can provide a sense of depth and/or liveliness to the entire song, since they add to the idea of contrast I am so fond of.

And that's it for today. See you next week for some new adventures with reverb!