Improve Your Drum Tracks With a Noise Gate 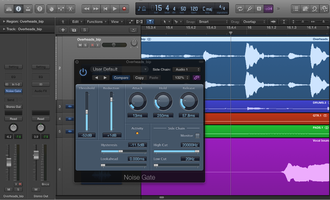 As we saw in the series dedicated to recording, good drum tracks have a lot to do with the overheads. In fact, while the energy of the drums is captured with close miking techniques, it's the overheads that provide width, naturalness and a sense of space to them. Even more so if you don't have ambiance mics. Unfortunately, placing overheads is a true science that demands years of experience. It's not unusual for recordings done in a home studio to exhibit a serious lack of balance in this regard. Generally speaking, cymbals are much more present than the rest of the drum kit elements. The snare and toms are the ones that suffer the most since they seem not to be able to breathe. Obviously, the best way to fix this would be to reposition the mics and track the drums again. However, that's often not an option because either you don't have the time or simply because you are mixing the tracks of someone else. Nevertheless, there's a nice little trick that will help you improve things greatly in such instances.

This technique is relatively simple to put into practice. Let's assume that the issue at hand is an imbalance between the snare and the cymbals. Begin by placing a noise gate on your overheads and soloing the track. Then, instead of having the overheads signal trigger the gate, use the external sidechain so that it's the track of the close miked snare that does. Set the Range parameter to its maximum value in order to get absolute silence when the gate is closed. Now play a bit with the threshold value. The gate should open only with the hits of the snare. Next, adjust the rest of the parameters so that you can hear the decay of the snare as long as possible, without letting through too much of the cymbals. At this point the result will not be very musical. But if you then change the Range parameter to a reasonable level, between 1 to 5 decibels, you should notice that the overheads are much more balanced now. It's time to unsolo the overheads and bring in the sound of your close miked snare. Enjoy the result!

This trick has its limitations, though, and if you set a too violent Range value, you risk losing that naturalness you are looking for. So, be careful!

Next week we'll keep on discovering the alternative uses of a noise gate and learn how to create a synthetic percussive instrument from an acoustic take.