Discourse on the method

First of all, you have to identify your goal. Nothing new under the sun here, after all, this is how you've been working throughout the entire series: Before jumping into action you should first take some time to reflect upon the task at hand. To do that, take another look at the vision of the mix you put to paper in the very first stages and think about it in terms of the different reverb applications I mentioned last week. 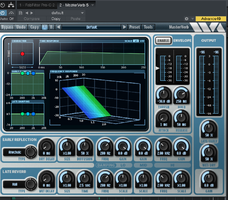 Only then should you start configuring your virtual patch to make the best use of the plug-ins according to your goals. And don't worry it's not as complicated as it seems, I'll give you a couple of tricks on how to do that in an upcoming article.

Next you'll have to choose your basic presets. Unlike with compressors and EQs, it is extremely rare to start dialing a reverb from scratch. First because it would take you lots of time and second because the people who create such plug-ins are more often than not much more competent than you at it. Thus, you should focus your efforts on choosing the best presets you will use as starting point. I can't emphasize enough the importance of this step, since they will condition the outcome. And that's why we'll spend quite some time discussing the topic, so that you can start working on your vision of the mix with a rock-solid foundation.

The next step will take us to learn how to dial in the different parameters of a reverb, so you can adapt them better to your needs. Contrary to what you might think, this stage isn't too complicated, as long as you took the preset choosing one seriously enough. Yes, I know, I insist quite a bit on this point ─ and I haven't even started yet!

Finally, we'll apply the reverb to the different elements of the mix that require it. This ought to be done as carefully as possible so as not to spoil all the work we've done so far. This way, you'll heighten the assembly of your sonic puzzle, rather than bog it down as is often the case when people use reverb mindlessly.

After we've gone through all of this, I'll give you some tips and tricks which I hope will help you improve your 3D work with reverbs, and also prefigure our work on the fourth dimension ─ time.

Okay, now you know how we'll go on about this and it's about time we get started. That said, next week's installment will functin as a brief interlude to discuss some pointers that should make your life much easier in the upcoming weeks.