What I mean by distortion here is obviously not the fat distortion you get from your overdrive guitar pedal. I am talking about the more or less subtle coloring that harmonic distortion provides. Without going into too many details, this type of distortion enriches the fundamental note of a sound by adding odd and even harmonics. This phenomenon dates back to the dawn of audio recording, since it's an inherent characteristic of the passing of a signal through an analog device, be it an amp, a compressor, an EQ, etc.

This sort of distortion is very often used during mixdown for several reasons, as you are about to see.

What is it good for?

While in theory distortion is a defect, because it modifies the original signal, harmonic distortion is a blessing in many ways. Put simply: your ears and brain use the fundamental frequency and its harmonics to identify a sound. Which means that harmonic distortion can reinforce the definition of a sound. Even more so considering the psychoacoustic phenomenon that, to a certain extent, allows you to identify a sound from its harmonics, even if the fundamental isn't present. This is obviously very useful when small speakers have to reproduce low frequencies, for instance. 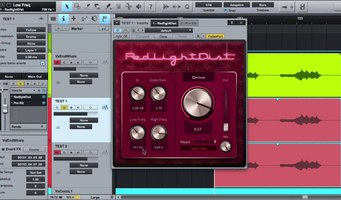 Harmonic distortion is also an excellent way to fight the "coldness" of the "perfection" inherent to digital recordings. It makes sounds more "lively" by making them less smooth and providing more "character."

On the other hand, this kind of distortion also produces a "natural" sensation of compression, which makes the signal more appealing.

Finally, and this is what interests us the most at this stage, this type of distortion entails what is usually a somewhat special coloring that contributes to the famous glue effect that we've been eagerly seeking lately.

Harmonic distortion is hardly a bed of roses, as we all know everything in life has a flip side. While usually pleasant to the ear, harmonic distortion can be quite tiring to the listener. So don't overdo it! You have to use it wisely and sparingly in order not to disturb the audience. The problem is that the human ear has the annoying tendency to get used to this type of distortion. Hence, controlling harmonic distortion can be a real challenge for any budding sound engineer. But don't worry, with time and some tips I'll give you later on you should be able to get the best out of it.

Next time we'll see how to make your ear aware of harmonic distortion.