At Audiofanzine we strive to follow as closely as possible all new trends and products regarding virtual orchestras. We have already tested many products in this category, and those we haven't is due mainly to the lack of any new features or the lack of feedback from the publishers. But the point here is that, beside the imposing VSL and EastWest — which split most of the market thanks to their regularly updated products and brilliant marketing strategies — there are some other options that rather than being simple alternatives, they are really comprehensive solutions, frequently offering features not available on the first two.

The quality obtained right now is quite amazing and the options available pose a real conundrum for any potential user trying to make up his mind or already on board, since it can very daunting to make a choice from among all products at hand. Now it seems that the horizon starts to finally clear up a bit after several years.

And "small" publishers can't keep still, even if the "noise" of the major players seems to clutter up everything. And so, Spitfire Audio, having already brought out its high-end Bespoke library, Spitfire Percussion, and the Albion series (Albion Vol.1, Albion II Loegria and Albion III Iceni) has decided to introduce a long-term project that looks very impressive: BML (which stands for British Modular Library).

After the Albion series, based mainly on blocks of orchestral character and mixed sections, even if it does have single instruments, BML offers an extremely detailed orchestra, seat by seat, on different volumes (we still don't know how many they will be). They make use of the same musicians (stemming from the London Symphony Orchestra, London Philharmonic Orchestra and the Royal Philharmonic Orchestra) and venue, George Martin's mythical Air Studios, as the preceding series, which allows us to mix or replace entire sections or individual elements. Here's a review of the first five volumes.

All libraries were conceived for Kontakt (full version only, from 4.2.4), recorded at 24 bits/96 kHz (but also available at 48 kHz) with Neve preamps and tube and ribbon vintage microphones in seven positions (close, close ribbon, stage, Decca tree, ambient, outriggers, and gallery), and converted through Prism interfaces. The publisher also included "premixed" versions in stereo and 5.1 surround. All recordings are being offered for download at a pretty slack pace, which allows us to download only the files we need (it's no use to download multi-channel files if we don't have an appropriate setup). We can also have different configurations depending on whether we use it on a notebook or a desktop computer.

For example, Vol.1, which groups the essential articulations for the first violins and cellos (the full list is to be found at the publisher's website) is available as four download packs, for a total of 60GB of files compressed with Native Instruments' algorithm (.ncw format, so it should be roughly twice as big once unzipped).

Download is done using the Continuata download manager (very practical, unlike certain publishers that offer a single file several GB in size) and there is no need for authorization, since all files are watermarked, according to the publisher. That means we can install the library in as many computers as we like. 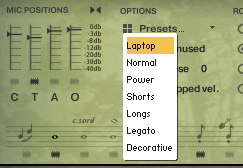 Its first asset is the diversity of recordings, as well as the sonic coherence with the publisher's previous libraries. But it's the diversity of articulations that will draw more interest. Along with the availability of a list for each instrument grouping all its articulations, a collection of presets offering all articulations one by one, a set called "economical" (ideal to work quickly, on the move, and which can be replaced with more detailed ones back in the studio) and another list called "Other brushes" (the publisher uses Brushes although in the manual it refers to them as Patches sometimes) with complementary programs, some of which are specially conceived as overlays for older libraries.

The interface is also common to all of them and it gives us access to the settings (articulations, mix and general controls), and the Ostinatum (see text box). We have at our disposal a staff (called Stanza by the publisher) displaying the different articulations available. The small symbols beneath it indicate their status (loaded or not). Same indicators for the sound recordings, three or four depending on the publisher's package (Main Mics, Alt Mics, Mix Mics, Surround Mics). We can create a mix per articulation thanks to a small symbol placed above the mixer faders. The other symbol allows us to control the stereo width and the stereo pan.

We then have the different transposition settings, controller mapping with visualization of the three or four main ones (Dynamics, Vibrato, Speed, and Expression), and the Round Robin options (it's not rare to find eight round robin samples for the Staccato and Staccatissimo). 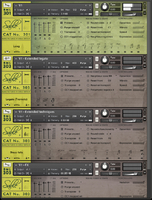 Let's start with the first library (the second-to-last to come out, actually): Horn Section Vol 1. Only the Main Mics have been made available by the publisher for now. The library offers a group of two horns and a solo horn, allowing you to reproduce several horn section sizes depending on whether you play one or two notes. We have no less than 15 articulations, from legato to trills, including mutes, rips (their size varying with the modulation wheel), multi tongue (the number of tongue hits according to the position of the wheel), marcato, bells up, etc. Here's a first example using Long, Cuivre, Staccatissimo, and Rips. A quick note: whenever possible, the examples are the same used in previous virtual orchestra reviews, without any effect being added, and you will only listen to the available recordings.

The solo horn is the plainest with only five articulations, but it does have the most important of all, the indispensable legato. It doesn't have Ostinatum either. Let's start with an example of the Close mic position only, and then a mix of all. 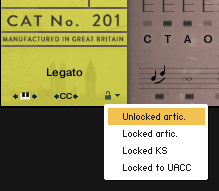 Let's turn now to Low Brass, the last volume made and which only has Main Mics available for purchase. We go deep this time to find a contrabass trombone, a tuba, a single cimbasso and two grouped cimbassos. The contrabass trombone is a slide trombone while the cimbasso is also a CB trombone, but with piston or rotary valves. Verdi and Wagner, here we come! Ah, yeah, well, it's only a manner of speaking...

A first example of the CB Trombone with the Tree mic position and then a mix of all four.

The same with the Cimbasso.

To finish with the brasses, here's the Tuba solo.

There's not much to reproach the publisher in terms of sounds, articulations or recordings, but we did however notice some very audible loops. Although it doesn't quite reach the level of certain EastWest and other products (read the reviews on AF), where the loops aren't only audible but they also generate clicks and artifacts.

In order to put aside any ambiguities, here's what we classify as audible loops in Spitfire's case.

These loops are different for every note, from a time point of view, which allows us to add some "life" when using several voices, but at the same time it forbids nice execution syncs (especially with the bow movements, but let's not rush it).

Also bear in mind not to exceed the standard duration of a wind instrument's sustain: a 20-second triple forte on a tuba isn't pretty common... In any case, most of the times we have a more or less reasonable duration before the loop is evident.

Remember that for the time being we only have the main mics for this volume.

The strings set, called Sable and made up of the BML301, BML302 and BML303 volumes, is at the time of this review the most comprehensive of all. In fact, the different packages provided by the publisher include Main Mics, Alt Mics and Mix Mics, while volume 1 is already in version 1.1 and offers Surround. 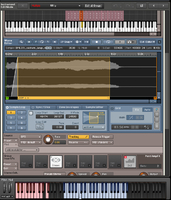 And we have to say that it is the most comprehensive in every sense of the word. In fact, the idea was to bring out all basic articulations for first violins and cellos in Vol.1, second violins, altos and double basses in Vol.2 and add additional techniques and effects for all instruments with Vol.3. So the abundance of articulations is jaw dropping because we can find almost anything we need (except for too specific techniques that can only be found in very contemporary contexts).

Overall, it shows a lot of musicality and seems to bear no comparison when it comes to the number and quality of articulations. The scripts work well, be it legato or round robins. The rate of "failed" notes/loops is the lowest we've found in all our reviews of orchestral libraries, which is no mean feat. A parameter to take into account all the same: Kontakt's Memory Server, if used, shows 5.17 GB...

And that's only the first violins!

Spitfire strikes a mighty blow with BML. True, the budget for the whole orchestra will add up to quite a sum (don't ask us how much since we don't have the info nor do we know how many volumes are foreseen). For the volumes already available the prices are: BML201 (Horn Section Vol.1, $278), BML203 (Low Brass, $403), BML301, BML302 (Sable Vol1 and 2 $657, each) and BML303 (Sable Vol.3, $492). That makes $2487 (without considering the different offers, bundles, etc. available). Yes, it might seem quite a lot. But it might not be that much if we consider that the library has no real match given the number of mic positions, the variety and number of articulations, the player's stability and power, and the possibility to install it on as many computers as we want (impossible to do with the iLoks or e-Licensers of competing products and which implies paying top price for an additional key or license)... And don't forget that VSL's Symphonic Cube, the only potential contender when BML is complete (and considering only the number of articulations but not the number of recordings), costs $7200.

It does have some small defects, true, especially with loops, but no deal-breakers like with some others. All in all, it features an unmatched power, quality and variety. A luxury orchestra, in every sense of the word: for its quality and for its price, aimed at a public that can amortize the cost with its productions.