The Best Strings for Electric Guitar 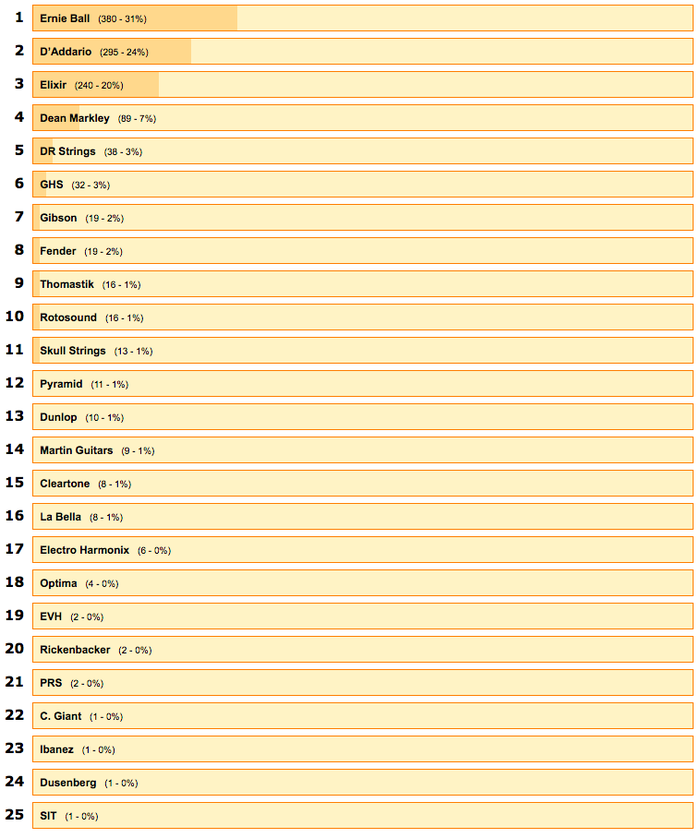 It's no big surprise that the brand introduced by Roland Sherwood landed the top spot in the poll. Ernie Ball strings are used by one out of every three guitarists, including some of the most legendary names in the guitar world, like Jimi Hendrix, Jimmy Page, David Gilmour, Steve Vai, Slash, Eric Clapton, and Angus Young, to name just a few. The brand deserves the credit for having introduced the Slinky model back in the 1960s, when Sherwood realized beginners had a hard time playing and doing bends (especially with the G string) with the standard strings back then, manufactured by Fender. Slimmer and lighter, the Slinky were widely adopted, making Ernie Ball the de facto new standard for guitar strings.

D'Addario is the American dream come true for two Italian immigrants who crossed the ocean to arrive in New York in 1905. They started importing strings made in the Italian city of Salle for all sorts of instruments. After the guitar, first, and then the electric guitar markets exploded in the USA, D'Addario started manufacturing strings under their own brand as well as white-label products for Gretsch, D’Angelico, Martin, and Guild. We owe them for the introduction of the first roundwound strings for bass guitar.

Established in 1995, Elixir is the newcomer among the old guard, making its name through research and innovation. Living up to the company's motto "Great Tone - Long Life," its founders are obsessed with finding the means to make strings last longer without reducing their sonic qualities ─ something they seem to have achieved with the introduction of their coated Polyweb and Nanoweb string lines, which are designed to protect from rust and dirt.

Famous for having invented the Talk Box, Dean Markley has been also manufacturing strings for 40+ years with the same goal as the rest of the brands: creating a string that lasts very long and sounds great. Their most successful realization of that is probably the Blue Steel line ─ strings frozen with a blast of liquid nitrogen at -320ºF. You could say those strings are beyond cool.

Founded by Gould, Holcomb and Solko in 1964 in Michigan, and later bought by Robert McFee, GHS has been supplying strings for some of the biggest names in the industry ─ including the likes of Stevie Ray Vaughan, Tom Morello, Santana, and Flea ─ for more than 50 years, but they also manufacture white-label products for other brands.

Contrary to most companies focusing on technology, science and state-of-the-art machinery for string manufacturing, DR Strings bets on handmade strings that sound different. Al Dronge, founder of Guild Guitars, passed along the idea to his son, who went on to create DR Strings. Al would surely be proud of him, considering the great job he's done getting some of the best players around, like Marcus Miller, Stanley Clarke, the late Johnny Winter, and Bootsy Collins, to swear by them.

Other brands included in the poll