A guide to mixing music - Part 6

Time Is on Your Side 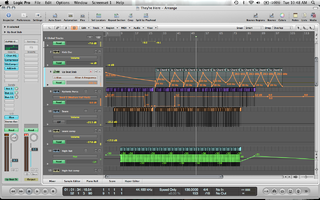 From a "macroscopic" level, the way you handle the evolution of the different elements within a mix over time is crucial. Simply put, that's what makes your song lively!

To go back to the "puzzling" metaphor, the time dimension transforms the image into a true film. And each piece of the puzzle has a particular role: Main character, supporting character or simply extras. In any case, they all have the capacity to come to life and transform to tell a story. And it's the sound engineer's duty to respect and enhance that story. To achieve that, he or she has an essential tool at his or her disposal: Automation.

When you think about it, the nuances of a musician's performance, the way a song is built, and how the arrangement evolves throughout the song already play with the time dimension. But automating processes and effects in the mixing stage opens up new and very interesting perspectives in terms of production and the creation of atmospheres. For example, automating the reverb could make the location where everything is going on move from a big concert hall into a matchbox. It's also thanks to automation that you can make the attention of the listener focus on the main vocals, a solo instrument or a melody at the appropriate moment. Alone that can change completely the dramatic development of the song.

On the other hand, automation also allows you to manage how articulations between instruments take place. Let's illustrate that with a practical example, take "La nuit je mens," a song by the late French artist Alain Bashung, for instance. The intro of the song starts with guitar and vocals alone. And then the bass comes in. Right at that moment, if you pay attention closely, you'll hear that the low end of the acoustic guitar is a bit thinner. In this case, it's the automation of the EQ that allows a smooth articulation between the two instruments.

The time dimension has its effects at the microscopic level, too, in direct relation with the rhythm of the song you are mixing. Indeed, lots of audio signal processors have time-dependent parameters. Be it the attack or release of a compressor, a delay or the decay of a reverb, all these parameters play with time in a microscopic way. And it has a huge effect on the feeling, the groove, of the music. That's why it's important to use them with a lot of caution. It shouldn't be hard for you to realize that, when you set these parameters respecting more or less the rhythm of the song, the outcome is better.

In the next article we'll assemble the final pieces of this puzzle to start putting all this theory into practice once and for all.