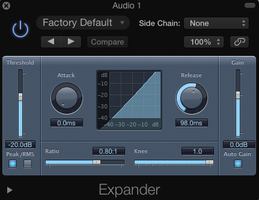 Let's start with the expanders. The principle behind this type of processor is the opposite of that of a compressor, in other words, an expander seeks to restore some dynamics into a rather lifeless signal. However, in real life, expanders are usually used more like an alternative to noise gates. What's more, noise gate plug-ins often feature expander options. Consequently, I don't think it's necessary to look into them more deeply: Whenever a situation calls for the use of a gate but the results are a bit too aggressive, try an expander for a bit more delicacy. Do note however that, besides the usual parameters of a noise gate, expanders also have a ratio control. The lower the ratio, the more subtle the processing.

De-essers are something I won't be dealing with either. First, because they are usually very easy to use and, second, their scope of application is pretty limited. Nevertheless, you might find it interesting to know that, besides reducing the sibilance of vocals, this kind of processor can also be useful to make a hi-hat, or any other cymbal, less aggressive on the overhead tracks. 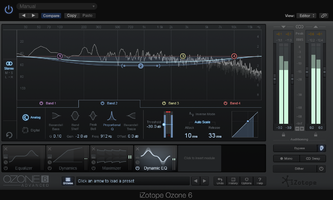 Let's move on to limiters now. As far as I'm concerned, you should never use a limiter during mixdown. Forgive my vehemence but, in my humble opinion, the use of such processors at the mixing stage is the best way to shoot yourself in the foot. Why, you ask? Well, first of all, a limiter in the master bus will only encroach on the mastering engineer's work, which is obviously not a good thing. On the other hand, by limiting a track, you risk completely deforming the original sound without realizing it. Especially since you might succumb to the charms of the "it's louder so it's better" effect and your headroom will irremediably be reduced, limiting you leeway sooner or later. Not to mention the obliteration of any variations in dynamics, which will suck the life out of your music. Trust me, using a limiter during mixdown is plain wrong.

To finish, just a couple of words on dynamic EQs. There are several reasons why I won't expand on this topic here. First, this kind of processor is usually more of an EQ than a dynamics processor, so it would be somewhat off-topic. Second, grasping how they work is not that straightforward, so it's easy to make more harm than good if not used wisely. As a consequence, I don't deem it adequate to talk about them in a "Getting Started" series. Third, it just so happens that I have never used a dynamic EQ because every time I feel like I need one I always realize that the problem lies elsewhere. And once I solve the actual issue I no longer need a dynamic EQ.

The next installment of this series will be the last one dedicated to dynamics, and after that we'll move on to other mixing topics.