The best cables for guitar and bass

The Top Brands for Guitar and Bass Cables

811 Audiofanziners took part in the poll and, as usual, we are more than happy to share the results with you: 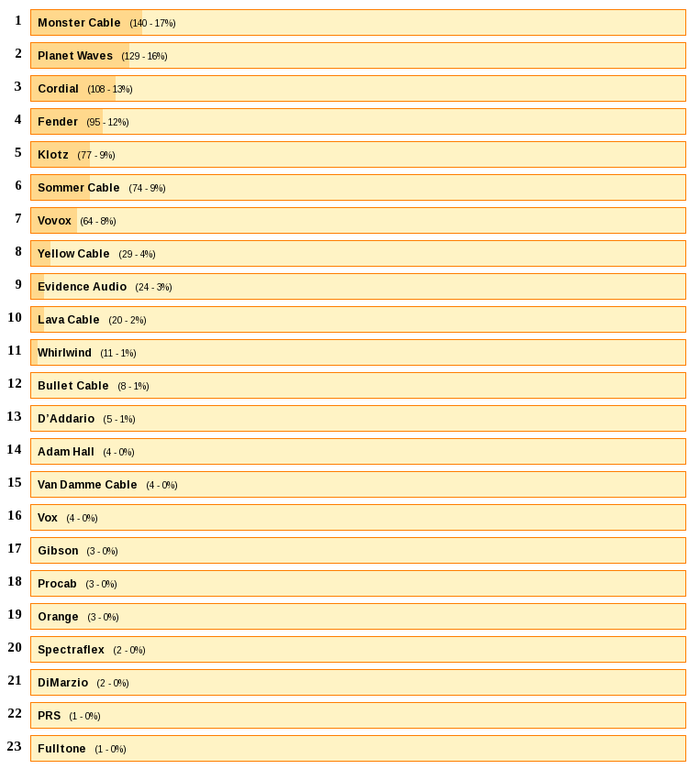 A former engineer at the Lawrence Livermore National Laboratory, Noel Lee decided to quit his job in 1974 to focus all his energy on the band where he played drums: Asian Wood. Success didn't come easy, so five years later he decided to open Monster Cable Products, Inc., a company specializing in the manufacturing of cables, the weakest link in the audio chain, according to Noel. Because he was also an audiophile...35 years later the brand has even made itself a name in the headphone world thanks to its partnership with Jimmy Lovine and Dr. Dre, which gave birth to Beats in 2008 and the subsequent marketing success which is no secret to anyone. The partnership between Monster and Beats ended in 2012.

The brand belonging to D’Addario landed the second spot in the pole. Planet Waves boasts about using a technology that allows it to provide perfect transparency in order to leave intact the harmonic character of the instrument, thanks especially to a very low capacitance and a shielding that avoids any interference.

The brand created by Heinz Schneckenaichnertroisième came in third, just in time to celebrate its 20th anniversary. Current CEO François Rousies likes to stress the fact that their cables use a biodegradable and eco-friendly packaging that is unique in the industry. Their catalog is divided into three product categories: Intro (adapters, RCA and digital cables), Peak (DMX, microphone and speaker cables) and Encore (bulk, CAT cables…).

The rest of the brands included in the poll were: