The best studio headphones for less than $50

The top studio headphones for less than $50 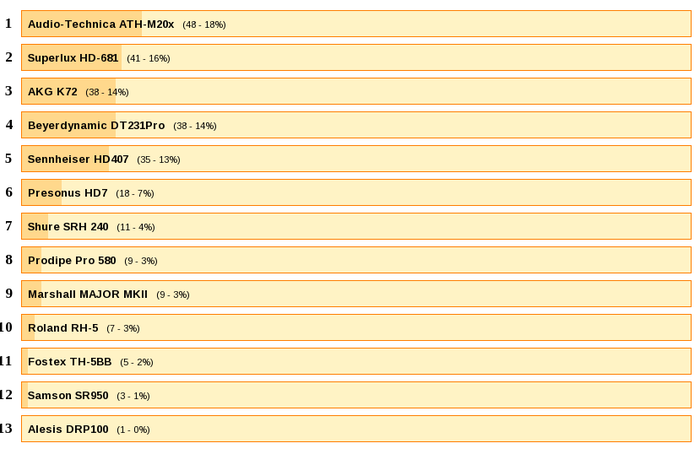 The Japanese manufacturer lands the top spot in our list with almost 17% of the votes. The ATH-M20x are over-ear, closed headphones with 40mm drivers whose design, supposedly, optimizes low frequencies. They weigh 0.42lbs, are rated at an impedance of 47 Ohms and come with a 9.8' non-detachable, straight cable. They have a similar look to the rest of their family, ranging from the ATH-M20x to the ATH-M70x (which have a street price of around $300).

Even though the Superlux HD-681 could be considered outsiders in the poll. they managed to snatch the runner-up position. We must admit that they carry an incredibly nice price tag and users can't stop but rave about them. They are over-ear and semi-open, rated at an impedance of 32Ohms, weigh 0.61lbs and come with a protective case. The 8.2' cable features a minijack connector and a 1/4" jack adapter.

We had a tie for the third place with the exact same number of votes:

Famous German manufacturer Beyerdynamic with its DT 231 Pro, a very lightweight model (0.29lbs) and feature supra-aural (on-ear) ear pads. They are rated at 32Ohms and come with a non-detachable 8.2' cable with minijack (although an adapter is also included), The earpads can be replaced, though!

Austrian manufacturer AKG with the K72, a pair of closed, over-ear headphones that weigh 0.44lbs featuring replaceable earpads. They are rated at an impedance of 32Ohms and have a non-detachable 9.8' cable. They come with a minijack to 1/4" jack adapter and feature a self-adjusting headband, like all AKG models.

Other cans included in the poll were: