How to automate your mix

"It takes different strokes to move the world," went the motto of the '80s classic TV series. Well, the same goes for automation. In fact there isn't one single way to do things, but different solutions depending on the tasks you need to achieve.

When it comes to functional automation, whose principle itself often calls for quick and, especially, precise parameter changes, "drawing" with a mouse is probably the easiest way to go. There is no need for real-time interaction here. It suffices with a couple of clicks here and there on the automation curve followed by careful listening of the part in question to check if you achieved what you set out to do and that's it.

Artistic automation however is much for controversial. There are those who swear by the drawing method, especially since modern DAWs offer an unprecedented versatility when it comes to linking lines and dots in no time. In general this argument is hard to dismiss: real-time automation during playback takes more time and will never match the perfection of something you've drawn with a mouse. On the other hand, there are those who oppose the benefits of this method based generally on its strict visual nature. And since the ear is blind, they prefer the "old school" method of doing everything in real-time, achieving thus a – in their "view" – more musical result. As time-consuming as it might be, considering that you will probably need several runs to get it right, in the end it is the music that wins, which makes it worth it. 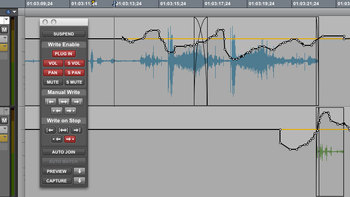 Personally, I do some of both to benefit from the advantages each provides. I think real-time automation is indeed more musical. And it's right at that moment when I truly believe the DAW is a musical instrument and I'm playing the faders and knobs to achieve the best possible performance, as if it was a concert. In my opinion, this "live" aspect gives it more "soul" and the eventual imperfections of the automation only add to it. But I'm not obtuse, if after several tries I haven't achieved my goal I am more than happy to be able to pick the mouse and start drawing to correct the imperfections.

That's very nice and all, but what about the people who don't have a control surface to automate in real-time? Well, I don't really have one in my personal home studio either. But I think you can nevertheless make do with what you have at hand. I don't have a dedicated control surface, but I use a combination of the Nektar Panorama P6, Novation Nocturn and an iPad 2, which I'm really happy with. But I don't have that with me when I play "outdoors"... Sometimes I only have a mouse at my disposal so I focus on the parameters that I deem more important for real-time automation and draw the rest. Even if it takes more time, the automation modes provided by modern DAWs make the task much easier, so the compromise is not that bad.

And that's it for today. In the following article we'll look at how automate the star of your mix, which is no small task...