The dark side of the stage

First of all, the fact that an instrument is not meant to take center stage doesn't mean it should disappear completely. Paraphrasing Andy Warhol, everybody is entitled to 15 minutes of fame. But how can you achieve that with automation without stepping on the feet of the true stars of your mix? There are many answers to this question, but I'll limit myself to the three I deem most important.

To explain the first method I'll use an analogy. Imagine you are walking down a street full of shops on Black Friday. The sidewalks are crowded with anonymous shoppers, none of which stands out from the crowd in your eyes. Now imagine that, for a brief second, one of them waves a hand in your direction. From that moment on that stranger will be the man or woman that waved the hand. It doesn't really matter if he or she disappears in the crowd or into a shop, your brain will have already registered his/her presence and will never really lose sight of that person. 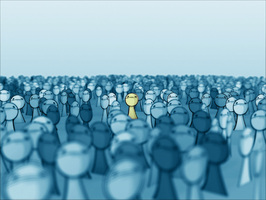 Let's see how that translates into musical terms. For a "supporting" instrument to stay in the mind of the listener, it just needs to wave the hand for an instant. The easiest way to achieve that is to use the volume fader to increase slightly the level of that instrument during the first bar it plays and then reduce it to a more appropriate level for the rest of the song. That way, its entrance will be highlighted and it will no longer be simply an "anonymous" instrument.

Another way to make a background instrument less of a mere accessory is to make use of the pan. But there's no need to overdo it. Slight variations from their original position and at a relatively slow speed ought to be more than enough. Your goal is to create a sense of movement, making it come "alive" to your listeners' animal instinct, as discussed in a previous article.

Last but not least are fade-ins and fade-outs at different speeds. This technique is based on more or less the same principles as the first one. If and instrument appears faster than the rest during a fade in, the listener won't be able to ignore it. And he/she will know that it is there, even if it's only in the background.

And the same applies to fade outs, although the other way around: the instrument in question will have to go out slower than the rest. This obviously means that it will make itself heard after the battle. But it will nevertheless make the listener be aware of it and be more attentive to it the next time he/she listens to the track. It might seem a bit far-fetched, I agree, but just think about the claps at the end of Metronomy's The Look.

Next week we'll end this chapter dedicated to automation tips and tricks by looking at it from a song structure perspective.