Recording drums - A matter of perspective

Once upon a time…

The first time I ever asked myself this question was at the beginning of the century. I had decided to dedicate my life to music and, back then, my university studies were still pretty fresh. What does that have to with anything, you ask? Well it just so happens that I was supposed to become a math teacher. So, after doing lots of research on the topic and analyzing tons of mixes, I couldn't get a straight answer regarding the panorama of a drum kit, which led me to put to use my statistics knowledge to carry out a study. I would've never imagined that 15 years later it would help me write an article for Audiofanzine... I guess it was destiny.

Here are the results of the survey I did and the conditions under which it was made.

To carry out the study I considered a group of 200 persons distributed in the following way: 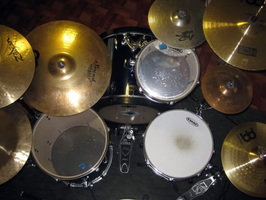 Each person had to listen to three different versions of the same song under their usual music "consumption" conditions. The first two versions were identical except for a small detail: the drums on one were mixed from the point of view of the audience and the other one from that of the drummer. The third one was a sort of "trap" because it was exactly the same as one of the others. Obviously, the subject didn't know in advance what the object of the study was. Once they had listened to the songs they simply had to fill in a questionnaire. Something like this:

At the end of the questionnaire was a rather "original" section dedicated to personal information such as age, gender, place of birth, profession, level of studies, height, eye color, length of hair, etc. The idea was to create some confusion in order to get to what I really wanted to get: discover whether the listener was right or left-handed. I somehow sensed that this laterality issue could be important, but I did not want to condition the respondents asking them only this information.

Now let's look at the results.

Now, let's see what the musicians thought: 96% identified correctly each version, 4% got at least one of them wrong so their eventual preference was considered invalid. 33% preferred the point of view of the audience, 60% that of a right-handed drummer, 3% didn't indicate any preference. If you remove the drummers from this group, 36.25% preferred the audience's point of view and 55% the drummer's, 3.75% didn't care.

Laterality had no significant influence among the group of musicians, excluding drummers. However, the instrument played seemed to have an important role, since 3/4 of the people who preferred the point of view of the drummer played either guitar or bass.

Now let's look at the results of those who have no direct relationship to the music world: 90% of them identified each of the versions correctly. As before, the remaining 10% got at least one of them wrong so their eventual preference was considered invalid. 37% expressed their preference for the point of view of the audience, and only 19% for that of the drummer. 34% didn't prefer any of them. Once again laterality didn't seem to have any significant influence on this sample. But I discovered a somewhat odd detail: 85% of the people who preferred the point of view of the audience listened to the songs in their cars.

To finish, let's consider the overall results: From the 200 persons surveyed:

I'll leave you to analyze the results until next time, when I'll tell you my own personal conclusion.