The gear to use

So, no, I won't do that. I'll actually work in a place that isn't particularly well-adapted to the task and with a simple, but not simplistic, setup in order to try to replicate the conditions of an average home studio. But don't worry if you are lucky enough to have outboard gear, I'll also address the use of such compressors/EQs/preamps, even though they won't be the focus of the series.

Today I invite you to my personal home studio, which I have especially reconditioned for the occasion. 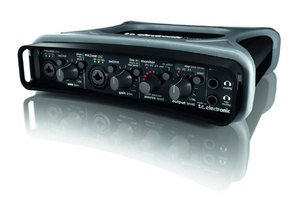 Let's start by the place itself, which is none other than my living room, a rectangular room of approximately 300 ft² (15 ft x 20 ft). Usually I only use my personal workstation to edit audio or for pre-production purposes, so I have my desk against the wall to have some room to actually live in. However, I decided to sacrifice my living room for the sake of this series and adapt my studio to the task at hand, so my workstation now sits one third away from the wall, lengthwise. As probably most of you do, I rent this place, which means it's unrealistic of me to try to do any serious acoustic treatment in it. Although there are always some ways to improve things. In this case I'll use two GIK Acoustics Screen Panels as well as an sE Electronics Reflexion Filter to try to limit as much as possible any unwanted reverb when tracking. At the same time, a carpet will help me attenuate the acoustic impact of my tiled floor. I know it's not very luxurious, but it's better than nothing.

Let's talk about the gear now. My computer is a late 2013 Mac Pro with a six-core 3.5 GHz Intel Xeon processor and 32GB of DDR3 RAM. It's really not necessary to have such a processing beast for what we are about to embark on, any relatively recent computer ought to be up to the task. However, this baby is so silent that it's a true blessing because it allows me to record without having to worry about any fan noises. 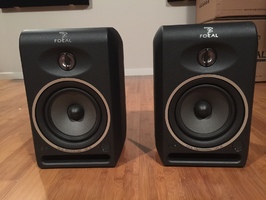 My digital audio interface is a modest TC Electronic Konnekt Live which I usually use onstage. Far from being fancy, this soundcard is more than enough for the task at hand. And I'll only be using the two built-in preamps.

Regarding mics, I'll limit myself to the bare minimum. I'll use the ubiquitous all-purpose Shure SM57 dynamic mic and a Sennheiser e609. Plus a couple of condenser mics, including one of the most classic mics around, the AKG C414 and a pair of outsiders, the Oktava MC012s. And last but not least a ribbon microphone, the Sontronics Sigma, completes the set.

For monitoring I use the Focal CMS 65 and a pair of closed-type headphones by Beyerdynamic, the DT 770 Pro.

And, to finish, a couple of details that aren't too important. The software I'll use for tracking is Reaper, although as you surely know, the choice of software doesn't change the quality of the recording in the least. Regarding other accessories, like cables, stands, etc., I use good gear but nothing too fancy, no "audiophile" products. In short, nothing too sophisticated, just the basics to be able to work adequately and without going broke.

And that's it. I know this probably won't be the most riveting article in the series, but I thought it would be interesting for you to know under which conditions I'll be working throughout the series. As you can easily realize, my setup is far from being extravagant but, as I will hopefully be able to show you, it's more than enough to make quality recordings.