The XY technique makes use of a two paired cardioid microphones. The idea is to place the two capsules of the mics as close as possible to get an angle between 90 and 135 degrees (see diagram). The larger the angle, the wider the stereo effect. Do note that when the mics are placed like this the left mic captures the sounds coming from the right and vice versa. 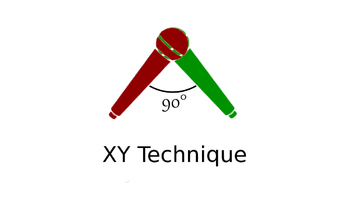 To record the overheads you only need to place the mics above the kit, right between the kick and the snare, so that these elements are not too off center. Be careful with the height though: if you place the mics too high you risk them pointing towards the outer end of the kit, which might result in you getting more room sound than "direct" sound, with all the elements off axis.

The XY technique is certainly the easiest to implement. Besides, it offers a great mono compatibility, given the proximity of the capsules. The flip side is that the stereo image you get isn't the widest. So if you want to get a larger than life sound, you'll need to consider another method.

The M/S or Mid/Side recording technique uses two mics, a cardioid one and another one with a figure-8 polar pattern. Both of which have very distinct roles in this somewhat peculiar technique: the cardioid is placed directly in front of the source in order to capture the "mid" signal, while the figure-8 is placed right behind it, at the same height, so it captures the left and ride "sides," as indicated in the diagram.

When using this technique for overheads, you should make sure that the kick and snare are at the center of the stereo image. You can play with the height and tilting of the mics to get different balances, highlighting either the cymbals and the snare or the kick and the toms. 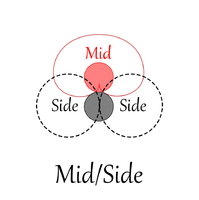 The main advantage of this technique is that it's perfectly mono compatible, thanks to the "mid" mic and the bidirectionality of the "side" mic, whose signal will disappear without it affecting the overall result. What's more, this technique allows you to easily manage the stereo width playing with the "side" signal. All in all, the result is as accurate as you can get.

The downside is that you need an M/S encoding matrix to get a stereo result. But there are plenty of software solutions for that, so there's no need to worry about it. And it's also important to note that with this technique you'll end up with a lot more room on the "side" signal. So if the place where you're recording doesn't have the best acoustics, you'll probably have to consider other alternatives. Finally, just like with the XY technique, the M/S won't offer you the widest stereo image.

And that's it for today. In the next article we'll continue exploring some other stereo recording techniques for overheads, so stay tuned!.