By now, you probably know the drill by heart: according to Golden Rule #1, every good recording of an electric guitar starts with the choice of the guitar and its settings (choice of strings, pickups setup, volume, tone, etc.), depending on the song you are producing. Indeed, the instrument itself is only second in importance to the musician playing it. Consequently, it will have a big impact on the recording, regardless of the music style. Don't believe me? Just take a listen to this "How does it sound" article. To sum it up, you should pay special attention to this before anything else, because even if the magic of the digital era allows you to achieve lots of things, it still doesn't make any miracles, like getting a fat Gibson Les Paul with-a-humbucker-in-neck-position sound if you record a Fender Telecaster with a single-coil pickup in bridge position. I know I'm exaggerating, but you get the point, right? I won't extend myself too much on the topic, but you should know that the same applies when choosing effects pedal and guitar amps.

So, to wrap it up: before you record anything, you have to work on your "actual" sound, in other words, the sound you hear in the room you're playing, always in accordance with the artistic direction of the production you are working on.

Okay, now that we've really driven home Golden Rule #1, let's move on to a not-so-minor detail that often gets neglected. Listen to these clips:

In both of these examples the notes played are exactly the same, at least in paper. But the sound is completely different. Why, you ask? Well, because the first clip was made playing only the A and G strings, while the second one goes a bit more liberally on the D and B strings on bars 3 and 4. This change – on such a basic riff – entails timbre differences not only on the sustain of the notes, but also on the "quality" of their attack. And this is far from being a petty detail! 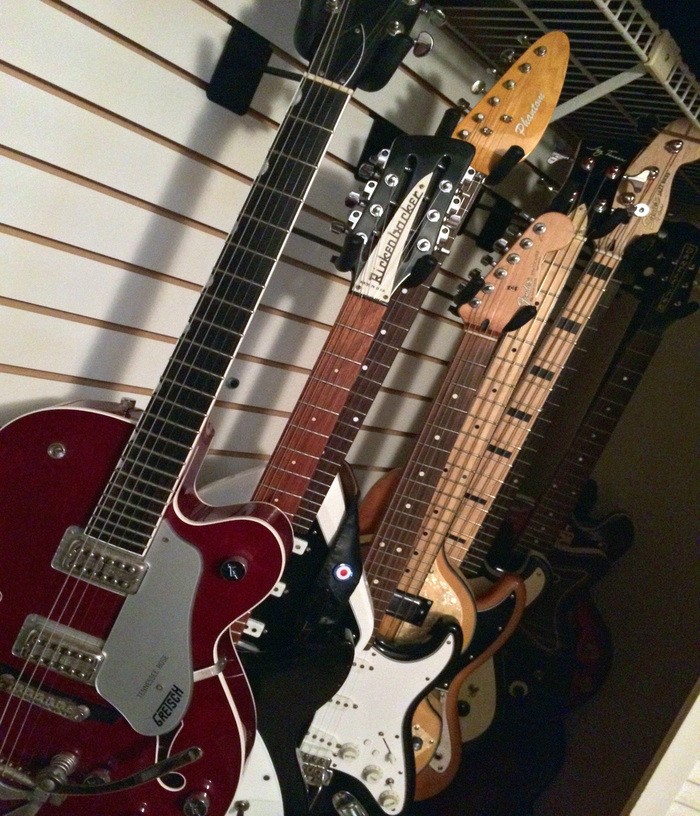 But what's the point, you ask? Well, when I play this riff live, I prefer the first version. It's easier to play in terms of fingering, which allows me to stay focused on the vocals without having to worry whether I play the A or E open strings, which is sometimes the case with the second version. However, when it comes to put it down on track, I wouldn't hesitate to play the second option. In fact, the differences in sound observed above have a lot to do with my vision of the mix. With this simple change I make sure that the riff stands out easily from the bass line on these bars, which will make my life easier during the mixdown sessions. And since I never play guitar and sing at the same time when recording, I can always replay the guitar part as many times as I need to until I get THE take, so it really doesn't matter.

And what do you take from all of this? Well, hat you might want to give a thought to the way you play something in the studio to get a particular sound without worrying too much about how you end up playing it live. Guitar is that kind of instrument that allows you this freedom without really altering your compositions. Besides, this can really make your life much easier at later stages.

Join me next week to discuss yet another detail often neglected when recording electric guitar!