Return To The Fast Track

Due to the merger of AVID and M-Audio, the "Fast Track" brand was transferred to the former and the M-Audio interfaces were rebranded as M-Track. Today we'll review the Fast Track Duo, which is the first one to carry only the AVID logo, after the AVID and M-Audio co-branded Fast Track C400 and C600 interfaces came out in 2011 and started the transition. So, what else is new?

AVID's audio interface catalog comprises two series now: the Mbox (Mbox and Mbox Pro) and the Fast Track (Duo and Solo). If the Mboxes are positioned as mid-range products due to their digital inputs and outputs and a larger number of analog inputs/outputs, the Fast Track's reduced number of inputs/outputs (which ought to be enough for beginners) clearly place them in the entry-level segment.

But the Fast Track are not only cheap Mboxes, they feature a very attractive aspect: iPad compatibility. AVID thus follows in the steps of manufacturers that, after a couple of years, are trying to profit from the success of Apple's tablet to sell audio interfaces. 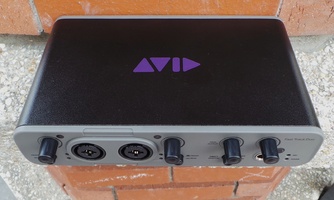 A big novelty for the Fast Track interfaces is that they are not made of plastic anymore, but rather of metal (for the largest part, at least). In fact, the front and rear panels are still made of plastic, but it is still a big improvement, especially for an interface that will be lugged around a lot. It is not made in China but in Thailand and it gained a bit of weight, which makes it sit more stable on the desktop, a good point as well. Regarding its look, we don't really love the somewhat grayish front panel. We prefer the nicer look of the Focusrite Scarletts…

The Fast Track Duo remains quite traditional: it features two mic/instrument inputs (XLR/TS combo) on the front panel, and two line inputs on the back (jack TRS) that can be activated via a switch. The two gain knobs are next to the inputs, while the two volume knobs, Main (for the jack TRS outputs on the back) and headphones, are on the right hand side of the front panel, together with the 1/4" stereo jack output. Underneath the volume knob there is a direct monitor button that allows you to hear what comes into the interface without any latency. We would have liked to have a knob to control the volume of this return in relation to the sequencer playback, like on most other audio interfaces. But in this case you will have to adjust the master volume of your sequencer, which is not very practical…

On the back side you'll find the 48V phantom power switch (for condenser microphones) and the connector for the tablet. AVID had the bright idea of including an iPad cable with the interface, which will save us from having to spend €30 on the "Camera Connection Kit," a nice detail. Nevertheless, there are two things that disappointed us: first, the cable is not compatible with the latest iPads that sport the Lightning connector. Which means that, in case you own one of the newest models (iPad 4), you will have to buy the Camera Connection Kit. Secondly, the audio interface cannot be powered via the iPad, meaning you'll be forced to connect it to the mains. AVID recommends using the USB connector with the iPads charger to that end.

We had an old M-Audio Fast Track lying around in the studio, so we took the opportunity to compare it to the Fast Track Duo. We used our Audio Precision kit that allows us to measure the inputs and outputs separately. Here are the results, but it's worth noting that the 2010 Fast Track has only one mic input and no line inputs:

It is evident that the line output isn't really better than the one on the 2010 Fast Track and, in fact, it is even worse in terms of deviation and THD+N. We also noticed a level drop below 50 Hz. In contrast, the mic input does improve, especially in terms of signal-to-noise ratio. So, the results are mixed with a slightly better mic preamp and line inputs in clear regression.

Is it worth the money? 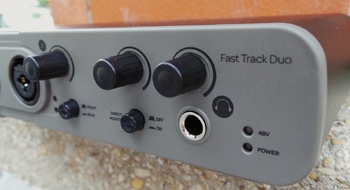 The question is whether buying this Fast Track Duo is a good choice or not. The answer depends on several things.

First of all, it depends on your interest in the Apple tablet. If you are not considering buying one, move on and get a USB audio interface with two preamps, like the Steinberg UR22, which really pleased us and is a lot cheaper (lees than €150 in stores). Moreover, if you are looking for an iOS audio interface that allows you to work without a PSU, go for the Apogee One that can run on batteries (but bear in mind that it has only one mic preamp). As far as we know, the Roland UA-22 Duo-Capture EX is the only iOS compatible interface that runs on batteries and features two mic preamps. 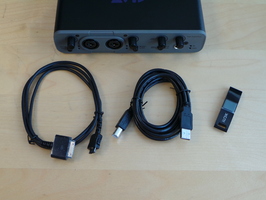 If you are interested in Pro Tools, the Fast Track might be a good option. In fact, the interface comes with Pro Tools Express, which will allow you to take your first steps with AVID's star sequencer. The limitations might be quickly constraining for some (only 16 stereo tracks), but keep in mind that you'll have a 25% discount if you decide to purchase Pro Tools 11, which translates into about 150 euros. Under this conditions, the Fast Track Duo is more interesting in comparison to competing products. When it comes to the Fast Track Solo — which according to the manufacturer is equipped with the exact same converters/preamps and goes for under €180 in stores —, it would be almost fully payed off, which might be of interest to beginners or professionals looking for a second light audio interface to carry around anywhere. And don't forget that an iLok (valued at around €40) is also included with the interface, which might tip the balance for some. If Pro Tools and the iLok are of no interest to you, move on…

In the end, the Fast Track Duo leaves us with mixed impressions because, in terms of audio alone, there is no real improvement when set against older models, plus its price is quite high compared to competing products. In spite all that, this interface might interest home studio owners who plan to get Pro Tools 11 in the near future, considering that the 25% discount pays off a considerable part of the Duo and almost entirely the Solo. At the same time, the buyers ought to have some interest in Apple's tablet because they will end up paying dearly for the iOS compatibility.