According to Tech 21, the Hot-Rod Plexi emulates a “stock ’68 Plexi.” For legal reasons, the company doesn't use the word “Marshall,” but there’s little doubt from the name, or the sound what type of amp was being modeled.

Solidly built with a black metal chassis featuring gold lettering, the Hot-Rod Plexi has two footswitches: one turns the effect on in its “Stock” state, and another adds a gain boost of up to 28 dB, depending on the setting of the Hot knob. Being able to kick into overdrive with the tap of a footswitch is quite handy live, especially when switching from rhythm to lead. 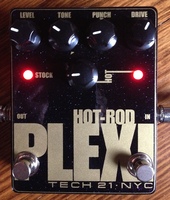 Above the Hot knob are four others, which offer you plenty of control over both tone and the amount of crunch and distortion you get. The Drive control sets your basic level of crunch, which can be accentuated in Hot mode. The Level knob is useful for adjusting the overall volume to compensate for changes caused by turning the Drive up or down.

The Tone control is actually a low-pass filter with a cutoff frequency that can be adjusted from 10 kHz to 1 kHz. It's flat when turned fully up, and as you bring it down it rolls off more high frequency information.

The Punch knob boosts or cuts at 500 Hz. To the right of 12 o’clock boosts, and to the left cuts. Boosting it can add in some pretty sizeable lower midrange “oomph” to your sound.

The Hot-Rod Plexi is powered with a standard 9V DC power supply such as the Tech 21 DC2 (not included) or a 9V alkaline battery. The manual states that battery life is about 100 hours, which is an impressive number. Still, if you’re going to use it for live performance, you’ll probably want to buy a power supply if your pedal board doesn’t have its own.

I used the Hot-Rod Plexi in both gig and rehearsal situations, and was quite impressed with its sound. Naturally, the tone of your amp is going to affect the overall sound quite a bit. Nevertheless, the pedal seems able to imbue any amp it’s plugged into with a Marshall-like sound.

I mainly used it with my Fender Twin-Reverb (“Blackface”) reissue, but also tried it through an Orange Crush Pix CR35LDX, a solid-state practice amp with a 10” speaker. I got bigger and fatter sounds through the Twin’s 12-inch speakers and tube circuitry, but the pedal also sounded really good through the Orange Crush.

The Hot-Rod Plexi is not just a one-trick pony, however, because varying the amount of gain gives you a lot of different different tones. With the Drive control most of the way down, I was able to get a clean, tube-amp tone, with just a hint of crunch. When I turned the Drive control up, I could go from a crunchy blues-like tone with moderate settings, all the way up to balls-to-the-wall high-gain sounds at extreme settings. When the gain is high, you do have to be careful with your EQ settings, to avoid low-midrange muddiness.

Here are some sound examples to give you a sense for what the Hot-Rod Plexi can do. These were recorded through the aforementioned Twin and Orange Crush on through an Shure SM57 into Pro Tools. I was playing an ESP strat with Fender Lace Sensor pickups.

To give you an idea of how an amp’s tone impacts the overall sound, here’s a comparison of the Twin and the Orange doing the same part. The Orange goes first, then a slight pause, then the Twin.

This time the Drive is up higher and the boost is on. Again, Orange first then Twin.

Here, I backed off the Drive to about half way, turned off the boost, and played some bluesy licks through the Twin.

To show its versatility, here’s a clean rhythm part through the Twin with the Drive control set to its lowest point.

The Hot-Rod Plexi delivers what it promises, giving you a big, warm, Plexi-like sound in a stompbox sized package. Now you can sound like you’re playing through a Marshall stack without having to schlep one around. The Hot-Rod Plexi circuitry, with fewer controls, will also be included in the company’s highly anticpated and soon-to-be-released Fly Rig 5 multi-effects pedal. Stay tuned.